The BIOL faculty offer expertise across a wide-range of Biology-related disciplines. Click on the individual names below for faculty websites, research interests, publications and contact information. 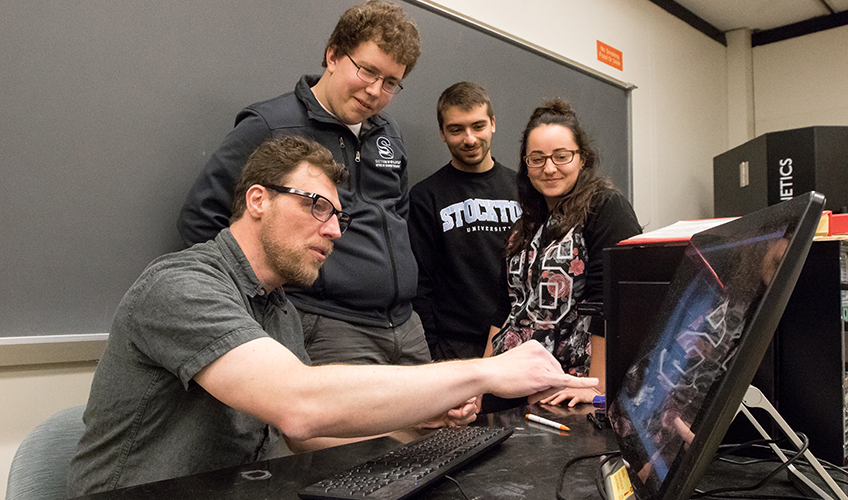 Dr. Bonnan is interested in three broad but interconnected areas of research: 1) the evolution of dinosaur locomotion, particularly in the giant, long-necked sauropod dinosaurs; 2) the evolution of an erect posture from a sprawled posture in dinosaurs and mammals; and 3) the evolution of pronation and supination in the forelimb of tetrapods. To these ends, he has utilized traditional anatomical approaches as well as state-of-the-art computer modeling to understand and infer how the limbs of both extinct and extant tetrapods have evolved and adapted. Currently, he has begun to utilize XROMM (X-ray Reconstruction of Moving Morphology) to produce three-dimensional animations of small animal bones in vivo. His current research focuses on the three-dimensional kinematics of lizard and mammal forelimbs, as means to "reverse engineer" how early dinosaur and mammal relatives may have moved and stood.

Dr. Burleigh has studied various aspects of placenta physiology and development. In an effort to further the understanding of gestational diabetes on fetal development Dr. Burleigh has studied the effects of glucose on the secretion of placental growth hormone by placental cytotrophoblast cells, examined the temporal expression of Growth Differentiation Factor 15 in rodents during development, and studied the physiological impact of advanced glycation end products (AGEs) on placental trophoblast cell development and gene expression

Throughout their lifetimes, cells are constantly bombarded by an ever-changing environment. They integrate these environmental changes with information about themselves to make important decisions of cell fate. Mistakes in these processes can lead to developmental defects or cancer. Research in Dr. Law's laboratory is interested in understanding how cells integrate information about themselves and their environments to make the correct cell fate decision. Using the budding yeast S. cerevisiae as an experimental model, we are currently focusing on the roles of post-translational histone modifications in controlling yeast cell fates. To understand this question, we regularly employ genetic, molecular, biochemical, and genomic approaches.

Dr. Luke is interested in the molecular evolution in prokaryotes and has studied genes responsible for carbon fixation and utilization in phototrophic and chemoautotrophic bacteria, including archaea found in the deep sea. With a broad interest in marine microbial ecology, Dr. Harmer has studied the relationship of the giant tubeworms from deep sea hydrothermal vents and their bacterial symbionts. Dr. Harmer is also interested in bioinformatics and participated in annotation of a microbial genome Thiomicrospira crunogena, a free-living chemoautotrophic-proteobacterium found at deep sea hydrothermal vents.

Dr. Lind's research is broadly targeted at understanding the role of the endocrine system in coordinating the vertebrate response to environmental change. The endocrine system plays a key role in translating environmental cues into physiological and behavioral responses that impact fitness. Dr. Lind's research examines both sides of this equation by quantifying how the environment impacts the endocrine system and how the endocrine system affects physiology and behavior. By elucidating the endocrine mechanisms that link environment and trait expression, my research endeavors to provide a better understanding of the capacity of individuals to respond to threats such as climate change and emerging disease and, in doing so, contributes basic foundational knowledge critical to informed and effective conservation strategies. Dr. Luke's laboratory at Stockton is continuing to pursue this goal by examining the physiological response to an emerging fungal pathogen in snakes and describing the hormonal coordination of reproductive physiology and social behavior in reptiles. He also believes that detailed documentation of the natural and life history of populations is vital to conservation, and will continue to pursue work describing the general ecology and natural history of reptiles and amphibians.

Dr. Hartman has a sharp interest in the development of the nervous system.  Using targeted genetic approaches, Dr. Hartman investigates how molecular pathways guide neural stem cell behavior and how alterations in these pathways can lead to devastating neuropathologies.  His recent work examines how the mammalian target of rapamycin (mTOR) pathway affects fate decisions of neural stem cells.

Dr. Dan Hernandez has a broad interest in conservation biology and has studied the ecology of the endangered bird the Red Knot (Calidris canutus rufa) and their relationship to the horseshoe crab (Limulus polyphemus) populations in the Delaware Bay. He has lead two expeditions to Tierra del Fuego, Chile to study the Red Knot and other shore birds in their wintering grounds. He has also been involved in conservation projects with Diamondback Terrapins projects at the Wetlands Institute in Stone Harbor, NJ.

Dr. Hutchison's   research is focused on a long-standing interest in understanding how plants, photosynthetic bacteria, and algae respond to low temperatures. One project focuses on the changes in gene expression that occur when algae encounter low temperatures, using the relatively new technique of microarray analysis. Another research area involves the Identification and characterization of organisms found in Artic and Antarctic samples. These organisms are likely to be affected by global climate change.

Dr. Lague  is engaged in ongoing research into patterns of sex-based skeletal differences (i.e., skeletal dimorphism) among living and fossil primates, including our early human ancestors. Using state-of-the-art technology for quantifying bone shape, he is addressing questions specific to assessing dimorphism (and, by extension, social behavior) from fossil remains.

Dr. Lewis'  primary research involves reconstructing the behavior and ecology of extinct members of the Order Carnivora1 by studying the functional morphology of the postcranial skeleton (and skull where appropriate). A second research interest includes how carnivoran behavior, ecology and evolution has impacted on and been impacted upon by human evolution. I am particularly interested in how our hominin ancestors may have influenced the structure of carnivore guilds and what role they may have played in the extinction of larger carnivorans.

Dr. Sedia worked on a variety of projects studying plant ecology and community dynamics of the New Jersey Pinelands. Her main interests are lichens and non-vascular plants, and the effects they have on post-fire regeneration of vascular plants as well as soil microbial activity. She has also participated in collaborative projects, including a study of the effects of salinity on establishment of Atlantic white cedar, and a project examining the role of fire and clear-cutting in survival of broom crowberry, a Pinelands endangered species.​

Impact of polluted environments on gene expression patterns in fish

Dr. Straub has been involved in developing biomarkers of pollution in marine fish. This work involved cloning and sequencing differentially expressed genes from the livers (and other organs) from contrasting habitats. The isolated genes are be studied by quantitative PCR and microarray analysis to determine which are suitable biomarkers of pollution. In addition, Dr. Straub has analyzed the fish for organic contaminants including PCB’s and pesticides.

Dr. York's research has been in two different areas of study. Dr. York’s first project has focused on the effects that temperature fluctuations over time have had on microbes in the aquifers of the geothermal well- field at Stockton. Microbes have been identified using a molecular genetic strategy. Dr. York’s second project takes a molecular genetics approach to understand the cellular function and regulation of an important enzyme, protein phosphatase 2A from the yeast Saccharomyces cerevisiae.