Remarks by student Ben Dziobek at the Feb. 27 “The Movement Continues” event organized by the Stockton Student Senate.

Hello everyone! Thank you for coming to today’s event, which was graciously put together by the Student Senate Governmental Affairs Committee. Thank you for all your hard work putting this together and for the Stockton University administration for allowing this to happen! 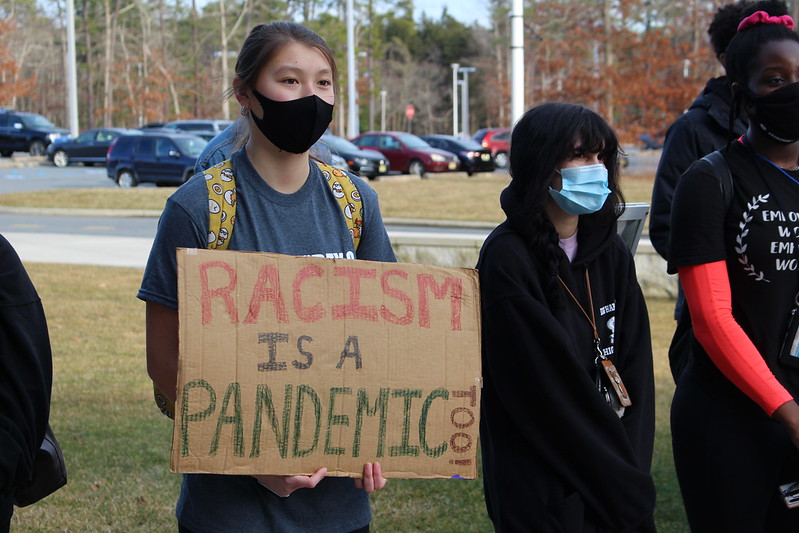 I wanted to start off by acknowledging our collective residence and reliance on stolen indigenous land. Here in New Jersey, we live on the land of the Lenni Lenape tribe, past, present and future. I want to take a second for everyone here to think about where they are from, and who is not there from the Creek to the Choctaw, to the Iroquois to the Pueblo, and to the endless number of peoples who were ripped off their land. And today I want to recognize that an acknowledgment of these things is not enough, and I want to encourage everyone here to confront their roles in the continued colonization of native lands and racism towards a wide variety of cultures that make  up the American melting pot.

Today, we are here to alleviate and understand ongoing suffering and injustices. To understand those injustices, I want to talk about intersectionality. You might have heard the term thrown around in the past few months, but I want you to truly understand what it means. Intersectionality is the interconnected nature of social categorizations such as race, class, gender and how they apply to an individual or group that create an overlap of the “interdependent” systems of discrimination. Wow! That was a lot, right? That is why it doesn’t get talked about enough, but it is so freaking important. So, let's break it down even further. 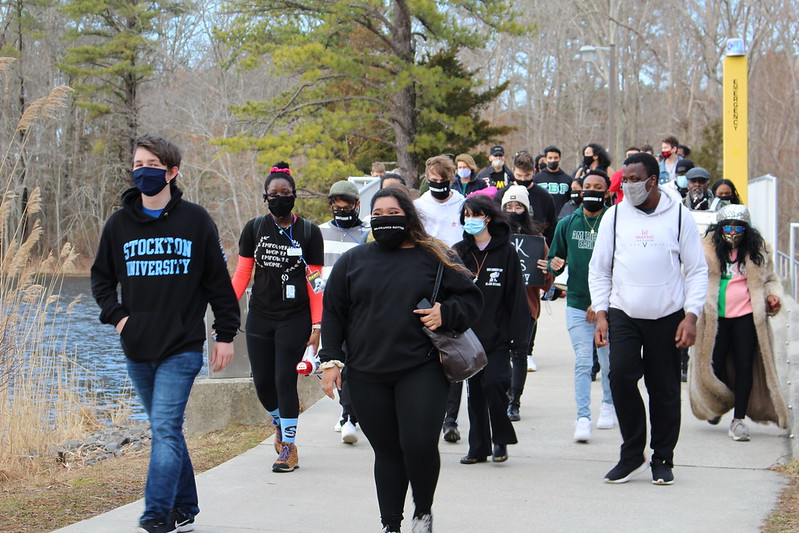 As easy it is to believe racism is just doing blackface without repercussions, or naming your university after a slave owner, it's not. There is a whole web of practices that were built in order to hold people of color back. Even though today, in this century, they may seem like normal everyday things. I’ll break it down by the schools we have here at Stockton. In the School of Business, we have the economics of the minimum wage and how the discourse around it is fueled every once in a while by big businesses that don’t want to pay their majority minority workers a livable wage. This creates a system where white people can slam people of color for being welfare moochers since they have to use SNAP, and Medicaid since their employers don’t care about them being alive.

In the School of Health Sciences, we have the fact that half of white medical trainees believe such myths as black people have thicker skin or less sensitive nerve endings than white people. These false notions fuel inadequate treatment of minorities’ pain and lead to figures in the American health care system that are appalling, like the fact that the rate in which black women die during pregnancy is 4 to 5 times higher than a white woman. In the School of Education, we perpetuate the system of poverty by not equipping our minority youth with a proper education because there is no funding for them. This is because school funding is attached to property taxes, those property taxes are low because they come from low income areas that struggle to progress with low wages. 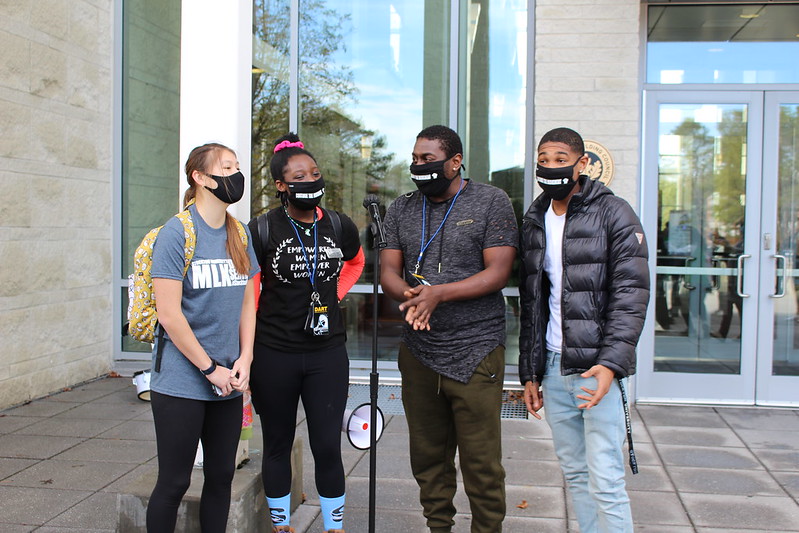 In the social sciences, we don’t teach enough about biases and how they affect real people, when those students become professionals working in the fields of law enforcement and social work. In the arts and humanities, we teach about euro-centric ideologies, practices, and history letting the colonizers control our views on those things. We also don’t acknowledge enough that people of color and other minority groups have had to claw their way to center stage in the world of art. It is because of those euro-centric ideals that we don’t listen to the teachings, and styles of these creators. In the natural sciences, we have a disproportionate response to climate change that doesn’t focus enough on the people being affected now, minority populations!

We need to teach about intersectionality, we need to learn about race in every classroom not just those in the Africana Studies department. That's why I am so humbled to be one of the Student Senators who supports Dr. Donnetrice Allison’s plan to add a race attribute to requirements at Stockton. This is a plan that aims to uplift voices across all of Stockton’s curriculum, and I hope the Students Senate, Faculty Senate and Board of Trustees show their support for this measure that you will hear more about later.

As you can see, there is so much more to racism than we thought. It's about the systems of systemic oppression that prevent certain communities from being able to rise up. And yet people still act like it is insane that black and brown communities are so upset about things. They are upset that they get to come together in frustration and solidarity over an issue that plagues them and only them. Others are so upset that they have to construct their own narrative about how they are somehow oppressed because others want to be equal. Reject the racist self-absorbed All Lives Matter crowd and do your best to educate and persuade. Some don’t want to listen and that's why a required R attribute would aid in making the next generation smarter, and more accepting of difference and perspectives.

I was asked to speak a little bit about environmentalism today. To start off, I am first and foremost an environmentalist, but as an environmentalist I understand that social justice is environmental justice. Along with all of you, I watch once-in-a-lifetime storms hitting every year, every season, every month. I watch as our first world country struggles to provide electricity for its low-income households because it relies on fossil fuels that create a positive feedback loop to make things even more difficult. I watch as water dries up all over the world, I watch as savannahs turn into deserts, as rainforests fall to make room for animal agriculture, as the natural becomes ever more unnatural. We need to understand why there is inaction and listen to those affected by inaction. People of color, Latino and Asian populations will have nowhere to live before rich white oil tycoons are affected. Inaction on climate change is about race, race was constructed for situations exactly like this, it was constructed to justify exploitation and violence. That's why it is our moral obligation to refuse the current future of our planet, and our minority populations by saying no to fossil fuels. That’s why, here at Stockton, I am pushing for divestment from fossil fuels. Divestment from the fossil fuel industry here at Stockton would be a commitment by the administration that profiting of the sickness, death and oppression of minority populations is unacceptable to them. And hopefully by the end of the semester we can say that Stockton is not invested in the morally reprehensible business of fossil fuels.

As we continue forward, we need to open our eyes—open our eyes to color, to differences, and the opportunity for change. It may be uncomfortable to consider that the world you live in was constructed for oppression but, we have to get over it and confront it. Confront it because we as humans are better than this. As the great Audre Lorde once said, “There is no such thing as a single-issue struggle because we do not live single-issue lives.”

Photo gallery of the event