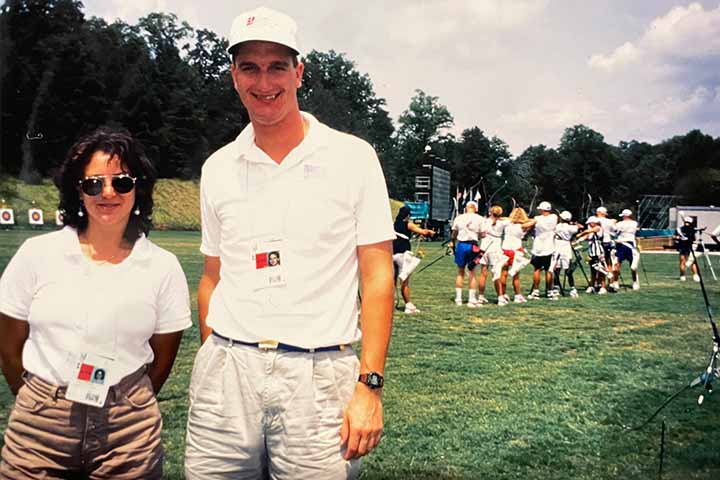 Leamor Kahanov, left, with a fellow trainer at the Stone Mountain site in 1996 during the Atlanta Olympic Games in Georgia. | Submitted photo

W hen I sat down to interview Leamor Kahanov, provost and vice president for academic affairs, I was a little nervous. If I told you chickens were the perfect ice breaker, you’d probably scratch your head, maybe even laugh. Well we did a lot of laughing, as my cup of coffee spoke volumes to Leamor, adorned with my chicken stickers.

“Tell me about your chickens,” she beamed. And that was the beginning of a fascinating conversation. We both had a love for raising chickens, and you find the chicken world is pretty small once you’re actively in it.

Kahanov raised chickens when she lived in California with her family, and then again when they lived in Pennsylvania while she was working at Misericordia University as dean of the College of Health Sciences.

As nature took its course and the flock dwindled, they decided not to take on more chickens, as Kahanov began her next venture as Provost and Vice President for Academic Affairs at SUNY Oneonta.

The American Dream and the World of Academia

Kahanov has a deep passion for first-generation students and first-generation Americans. Her parents hailed from Israel and moved to England to learn English. They then came to America, where they had the opportunity to go to university and pursue their future.

“At the time, it didn’t work out due to money and other circumstances, but eventually, as I went to college, my parents did, too,” Kahanov said. “They both own successful companies. They’re kind of that American dream.” Her mother started an art studio and her father began a consulting business. They are now retired.

“What I appreciate about it is what we now call ‘code-switching.’ It’s living in different worlds,” Kahanov reflected. It ties back to cultural differences and not being immersed in how Americans do things. She gave an example of how her parents could not understand buying an expensive dress for prom or attending Kahanov’s sporting events or band concerts. It’s learning to navigate these things through different lenses.

Kahanov relates this back to all college students and the “foreign land” of academia.

“What is a bursar? What is a provost? How to get through and know our language, navigate our finances, how to join a club,” Kahanov said.  “I try to approach what we do here [at Stockton] from the perspective of we are a foreign land of people, and to help students learn how to navigate our world. We’re here to help lift people up.”

Kahanov earned a Bachelor degree in Exercise Science, and Athletic Training from Indiana University and a Master of Science in Exercise and Sports Sciences from the University of Arizona. I was curious to know where her love for athletics and sports medicine came from, as it may not be what you would assume is part of a provost’s academic history.

One Piece of Advice for Starting Your College Journey

Kahanov pointed out these people can show up in your life in many places. It could be the person serving you lunch every day and the words they give you.

Kahanov smiled and said, “So I was a gymnast and in high school I got injured and I ended up in the athletic training room. A lovely, lovely man Doc Brown was the athletic trainer there, and because I was injured and couldn’t compete, I saw what he was doing there, and I said, ‘I think I want to do this.’ And so, this is in the early 80s, and he hands me this book and says if you can read this book and complete these worksheets and bring it back, I’ll think about it.”

I think you can guess what happened next. She did it. And from there, he took her on as an apprentice in the off seasons, and then she went to undergrad to pursue it further.

Fast forward to 1996, and there is a call out for people to be host athletic trainers at the Atlanta Olympic Games in Georgia.

“So, I said, sure, let’s try it,” Kahanov said. “And I ended up managing the Stone Mountain site. At the time that was the site for the cycling velodrome and archery. I learned a lot about other countries and how they manage things. The way we do it is not the only way. We have to find the way that works for individual people.” Learning that early in her career made a significant impact on how she handled many chapters of life moving forward.

She then went on to training at National Track and Field Championships during the 2000s, and then traveled through Europe for a year with the U.S. Volleyball Team.

“I am just so blessed. I got to see so many amazing places and different ways people do things.”

When Kahanov is not wearing her provost hat, you can find her riding her bike and enjoying all things outdoors with her husband, Mitch.

“My husband and I like to try something new every year. One year we tried curling, one year we tried a mahjong club,” Kahanov smiled. “So, this year, I think we are going to try pickleball.”

She is also an avid reader. “Right now, I am reading Boardwalk Empire again. I read it a long time ago, but this time it has weight to it. I just finished Fast Girls, which is about the first women to be track athletes and the hurdles they faced. Because in the teens and 1920s, women were thought to be too delicate to be athletes, that it would harm them.” Kahanov is also reading The Fifth Wave, which focuses on the next iteration of education.

Kahanov also loves to have a garden going and growing her own food. This is no surprise, given the joy fresh eggs bring her. Having lived in different places, she also has learned to grow a variety of things according to the zone she is in.

When asked what her favorite thing to grow is, she laughed, “Whatever will grow.”