People filed in and out of the C-D Atrium to chat with over 70 undergraduate students in the School of Natural Sciences and Mathematics about their research projects on April 22.

Galloway, N.J. - A fitting way to celebrate Earth Day, more than 70 students shared 35 research projects at the School of Natural Sciences and Mathematics (NAMS) Symposium on April 22 in the C-D Atrium.

“The NAMS symposium is a showcase for the extraordinary talent of our students working with an engaged and nurturing faculty,” NAMS Dean Peter Straub said. “I am proud of their current accomplishments and see great things in their future.”

Projects honored at the event were: 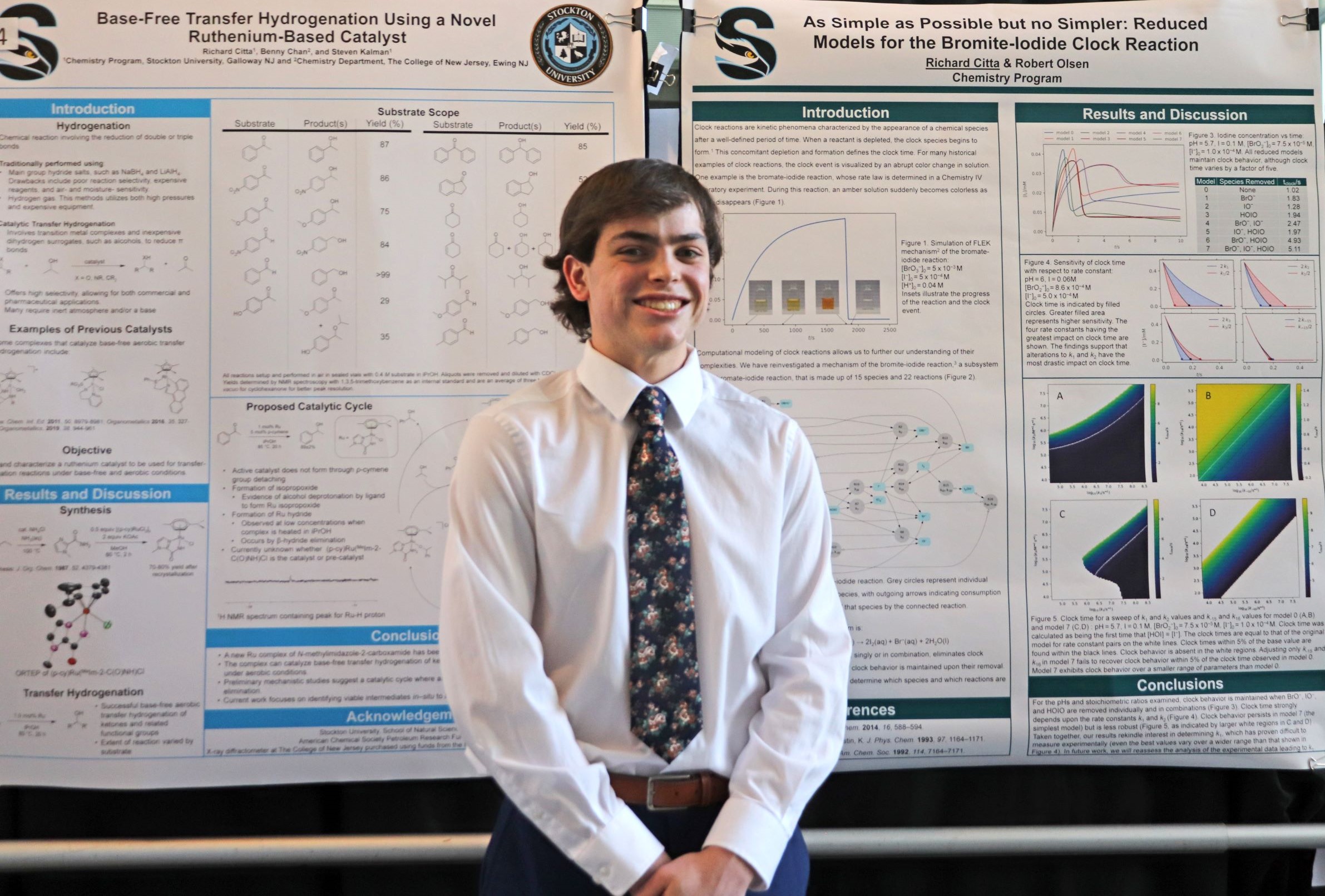 As Simple As Possible, But No Simpler: Reduced Models of the Bromite-Iodide Clock Reaction

Clock reactions are kinetic phenomena characterized by the sudden appearance or disappearance of a substance after a well-defined period of time. In a large family of these reactions, clock behavior is visualized through an intensely blue solution becoming abruptly colorless as iodine disappears. A detailed mechanistic understanding of clock reactions lagged their discovery by about a century. Today, we can apply modern techniques to further our understanding of their complex nature. We have reinvestigated a mechanism of the bromite-iodide reaction made up of 15 species and 22 reactions. The bromite-iodide reaction is a subsystem of the bromate-iodide reaction, a clock reaction whose rate law is determined in a Chemistry IV laboratory experiment. We take a computational approach to simplifying the mechanism while maintaining clock behavior over a range of conditions. We have developed several reduced models via sensitivity analysis by eliminating redundant species, finding that clock behavior can be maintained when BrO−, IO− and HOIO are individually removed from the model. Clock behavior is sustained, albeit over a somewhat narrower range of conditions, when combinations of these species are removed. Notwithstanding this narrower range, we have several simplified mechanisms in hand and will proceed to identify the most important reactions through rate sensitivity analysis. 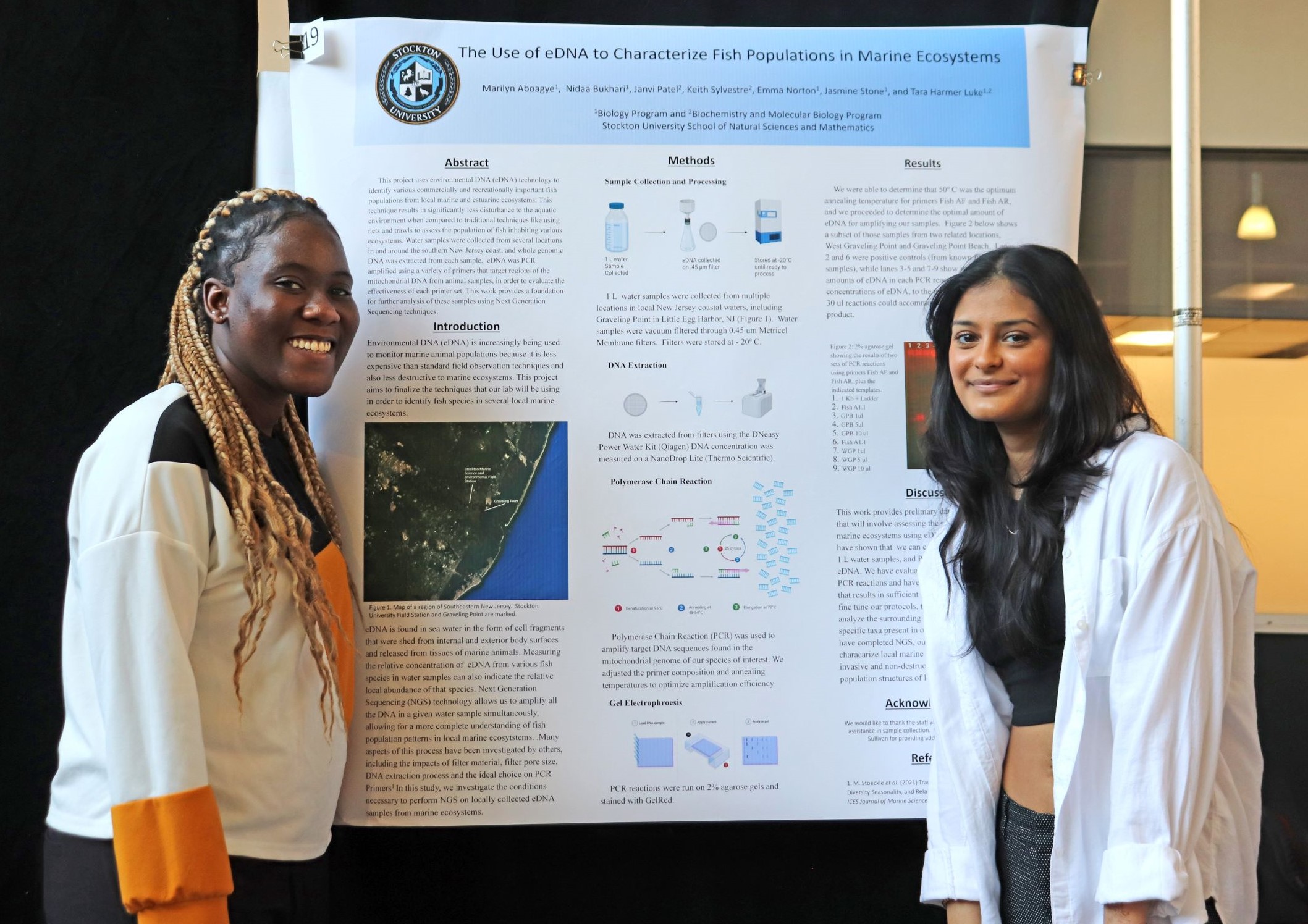 The Use of eDNA to Characterize Fish Populations in Marine Ecosystems

This project uses environmental DNA (eDNA) technology to identify various commercially and recreationally important fish populations from local marine and estuarine ecosystems. This technique results in significantly less disturbance to the aquatic environment when compared to traditional techniques like using nets and trawls to assess the population of fish inhabiting various ecosystems. Water samples were collected from several locations in and around the southern New Jersey coast, and whole genomic DNA was extracted from each sample. eDNA was PCR amplified using a variety of primers that target regions of the mitochondrial DNA from animal samples, in order to evaluate the effectiveness of each primer set. This work provides a foundation for further analysis of these samples using Next Generation Sequencing techniques. 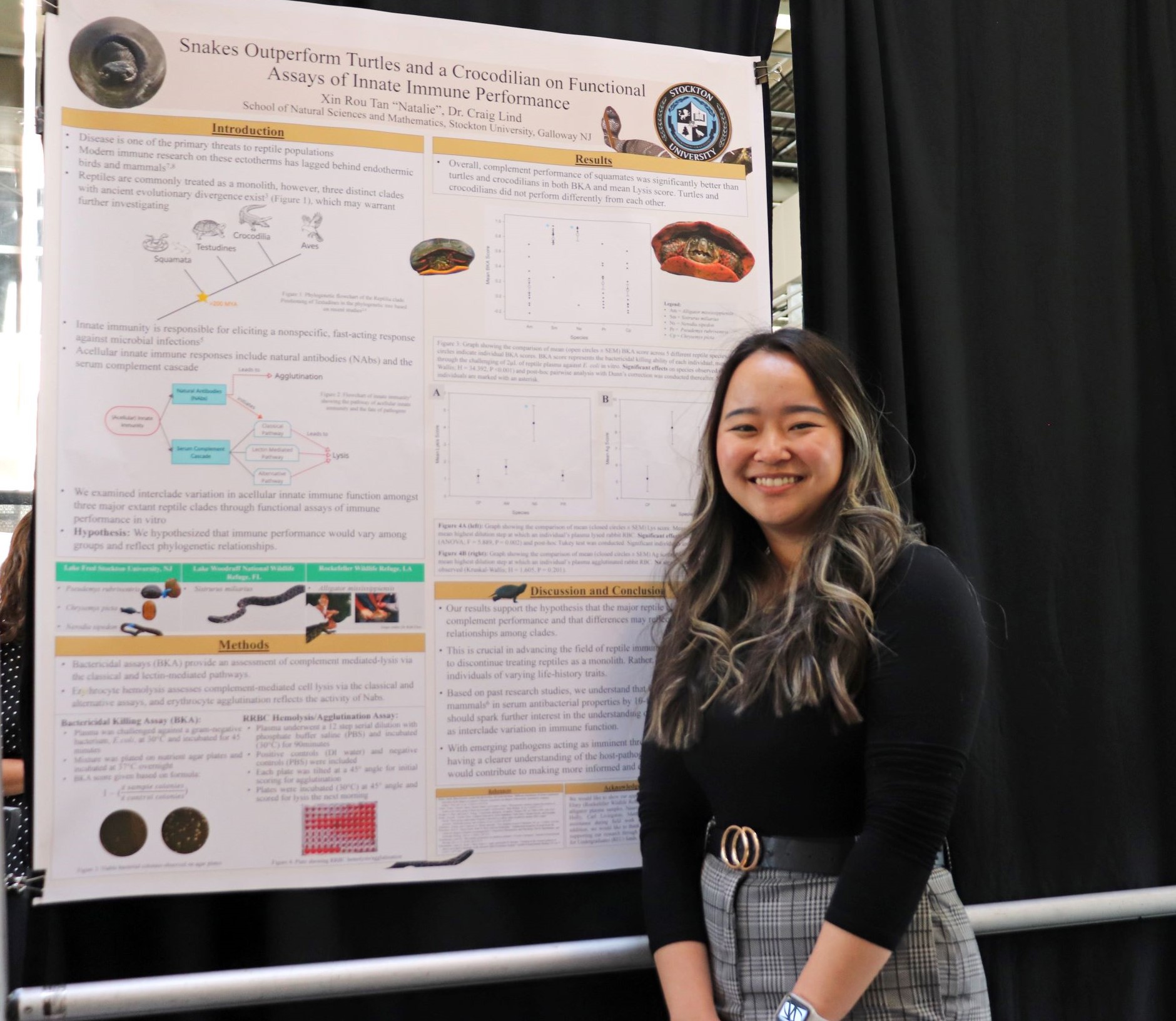 Disease is one of the primary threats to reptile populations, leaving them imperiled globally. However, modern immune research on these ectotherms has lagged behind endothermic birds and mammals. This imbalance leaves conservation biologists to act without a full understanding of reptile host-pathogen dynamics. Innate immunity involves cellular and acellular responses, including natural antibodies (NAbs) and the serum complement cascade. The acellular innate immune system is responsible for eliciting a nonspecific, fast-acting response against microbial infections. The goal of this experiment was to examine interclade variation in acellular innate immune function amongst three major extant reptile clades. Specifically, we characterized innate immune performance in two Squamates (Nerodia sipedon and Sistrurus miliarius), two Testudines (Chrysemys picta and Pseudemys rubriventris), and a Crocodilian (Alligator mississippiensis). We hypothesized that immune performance would vary among groups and reflect phylogenetic relationships. We employed immune performance assays which challenged individuals’ plasma against a gram-negative bacterium, E. coli, and mammalian erythrocytes in vitro. Bactericidal assays provide an assessment of complement mediated-lysis via the classical and lectin-mediated pathways. Erythrocyte hemolysis assesses complement-mediated cell lysis via the classical and alternative assays, and erythrocyte agglutination reflects the activity of NAbs. Complement performance of squamates was significantly better than turtles and crocodilians, which did not perform differently from each other. Our results support the hypothesis that the major reptile clades differ in complement performance and that differences may reflect broad phylogenic relationships among clades, therefore, highlighting the need for further exploring of interclade variation in immune function among reptiles. 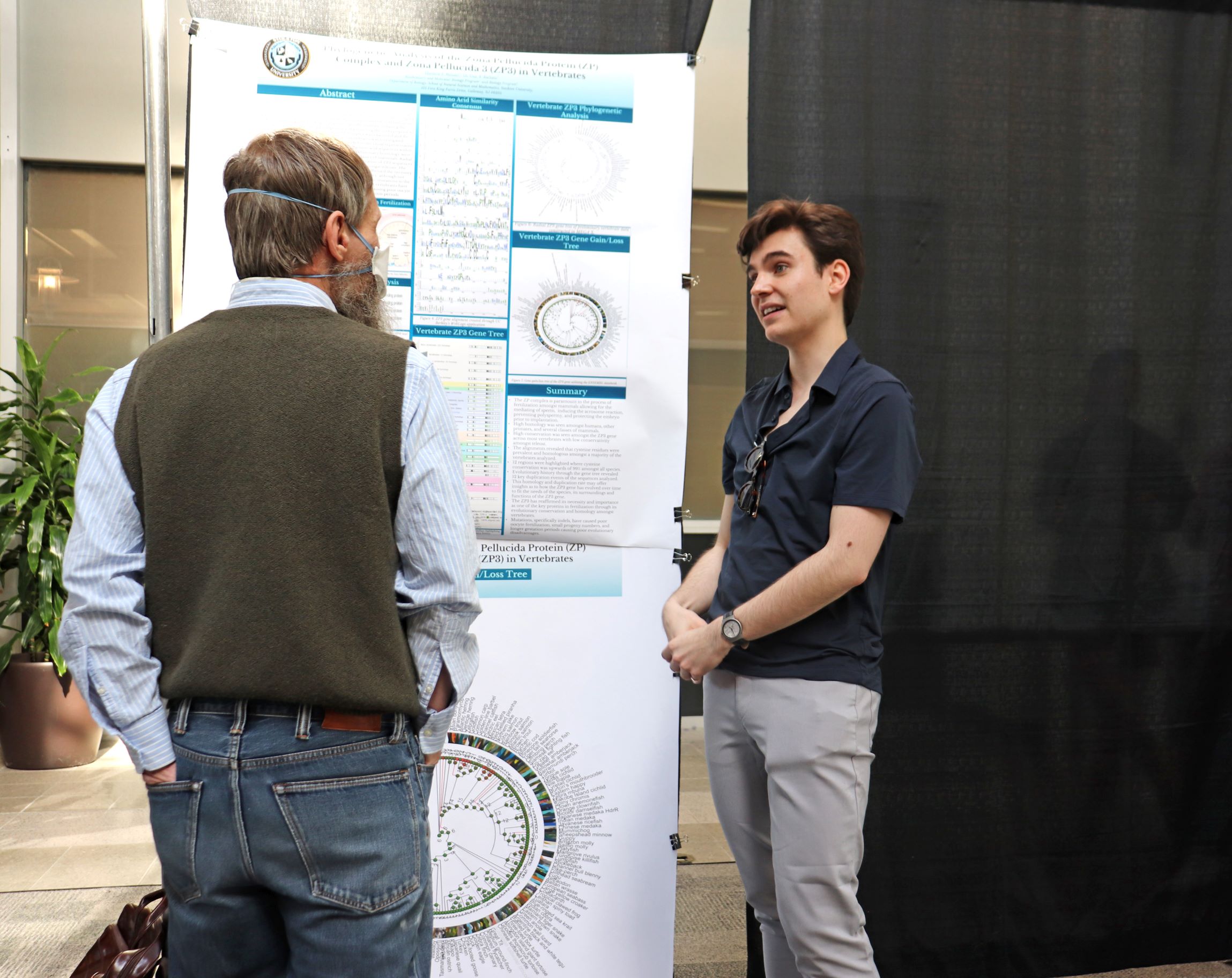 The zona pellucida (ZP) complex contains glycoproteins which are utilized in the formation of the “coat” surrounding oocytes. ZP glycoproteins have been shown to be involved in early fertilization events, as well as early embryologic development. The ZP3 gene codes for the predominant protein in the complex that surrounds the mammalian oocyte and plays a pivotal role in fertilization by mediating sperm binding in a species-specific manner, inducing the acrosome reaction, preventing polyspermy and protecting the embryo prior to implantation. Homology of the human ZP complex was examined and the evolutionary history of the ZP3 amongst vertebrates was investigated. ENSEMBL, MEGA-X, WebLogo, and UniProt aided in the visual representation of the homology and evolutionary history of the amino acid sequences within each vertebrates’ ZP3 alignment. High levels of evolutionary homology were seen amongst humans, other primates, and several classes of mammals. Radial phylogenetic trees were utilized to exhibit high conservation of ZP3 sequences amongst these groups as well as low conservativity amongst teleosts. The evolutionary conservation throughout vertebrates has reaffirmed the necessity and importance of the ZP3 in fertilization as the primary, although not exclusive, sperm receptor. As a key protein in reproduction, mutations in the gene may have distinct evolutionary disadvantages. Some vertebrates have acquired due to mutation, specifically indels, in the gene causing poor oocyte fertilization, small progeny numbers and longer gestation periods.

Salt marshes depend on sediment deposition and accumulation in order to survive through times of sea level increase. Sediment deposition in tidal salt marshes is well studied, but research typically focuses on larger areas, which could be less accurate for an entire mash surface. The goal of this research was to determine the spatial variability of sediment deposition and accumulation in a New Jersey salt marsh over a very small area. Sediment traps were placed in the mash at increments of 5 and 10 meters ranging over a 2800m2 squared area. Traps were visited daily, weekly, and at the end of the month to collect sediment, which was then dried and weighed. Results will discuss the correlations of sediment deposition in relation to time, air pressure, water level and weather. Discovering how the sediment accumulation varies in the small area is important as it allows us to assess the precision on previously published sediment accumulation data.