Port Republic, N.J. - To some, the Bead Wreck anchor would have looked like 500 pounds of rust and years of work to make about 240 years of deterioration from brackish water disappear, but Stephen Nagiewicz saw something much different.

Nagiewicz, an avid diver and an adjunct instructor who teaches Marine Science at Stockton University, looked through the crumbling wrought iron and saw an artifact that could help the public remember local Revolutionary War history and an opportunity for his students to learn and share history with a hands-on restoration project.

On Oct. 6, exactly 242 years after the Battle of Chestnut Neck, Nagiewicz stood next to the fully restored anchor at its new resting place at the Stockton Marine Field Station in Port Republic and told its story and connection to the Bead Wreck. 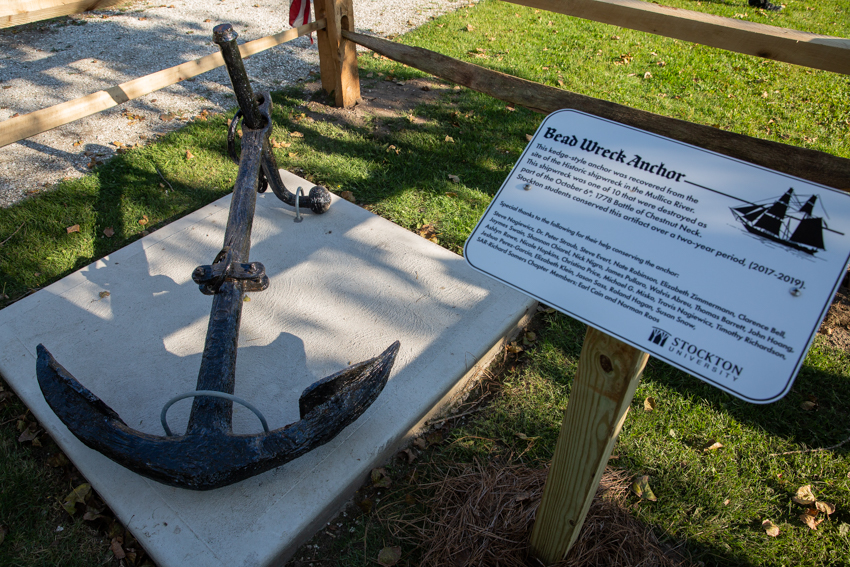 "Ten naval ships and over 300 British marines and Loyalists came here to burn the town, which was supporting privateers. Boat captains, sailing ship captains and whale boat captains of the time had been issued a Letter of Marque and became privateers. They were authorized to steal from the British and give to George Washington, which they did, and they did it so well that the British were starting to see shortages of lumber, cloth and food because the Mullica River was the place it was all going to auction," he explained.

The Field Station is located along Nacote Creek, which feeds into the Mullica River. Using sonar technology, Nagiewicz, students and Field Station staff have discovered and mapped Revolutionary War shipwrecks that would have become forgotten history.

"Sir Henry Clinton got really annoyed and told the commanders to destroy the town of Port Republic, which they did. They burned it along with the tavern and 10 ships in the harbor that were prize vessels most likely," said Nagiewicz.

A prize vessel is a boat that privateers commandeered from the British, so during the battle, the British were burning their own ships to keep the privateers from benefiting from their resources. 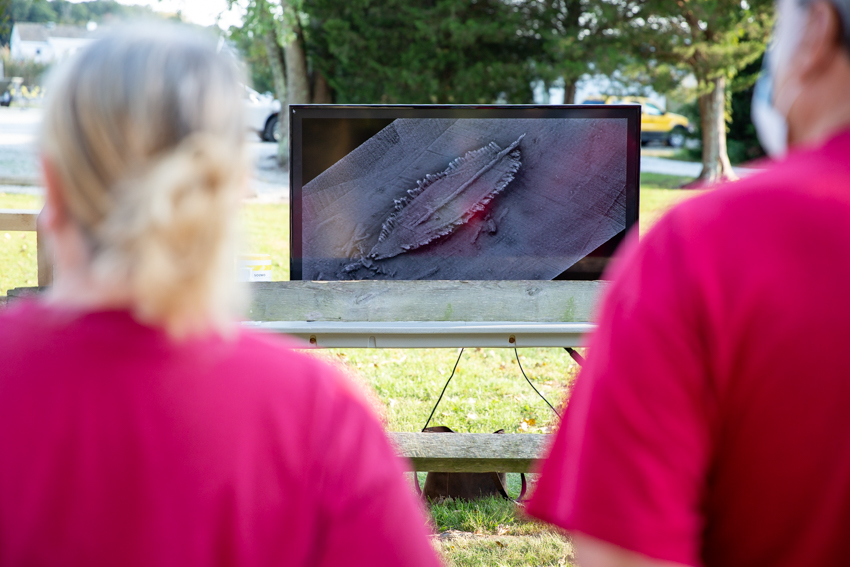 Guests look at a sonar image of the Bead Wreck.

The Bead Wreck, named after the glass trading beads found scattered among the ship's remains, was one of the prize vessels. The anchor was found near the wreck and came to Nagiewicz by chance, so he initiated the restoration work.

He offered his students extra credit to help him with the project, but admitted that those who came didn't need any extra credit. "They came here because they wanted to learn about history," he said.

Peter Straub, dean of the School of Natural Sciences and Mathematics and a diver himself, recalled his earliest memory of the anchor. “When it first came out of the river it was encrusted, fouled and covered with living organisms. What Steve and the students have done, in a number of ways, is turning back time. They did it chemically and electrolytically," he explained.

The anchor sat in a tank for about two years while electricity and a chemical bath soaked into the rust and turned the iron into hematite, which corrodes much slower.

A small crowd gathered in front of the anchor to commemorate the veterans who fought in that battle and their families.

"The town knew the British were coming for a long time. They had a chance to evacuate all of the valuables. The anchor is a symbol of that whole fight. If it weren’t for the privateers at Chestnut Neck, we’d be drinking tea and eating crumpets instead of Dunkin Donuts and WaWa coffee. The privateers were a big part of the Navy that helped us win the war. There were over 1,700 privateers up and down the U.S. coast. There were only at the highest point 64 Colonial Navy ships. The privateers outnumbered our own Navy," said Nagiewicz.

Gary and Vicki Cantell were among the guests at the ceremony and shared how they found the keel of a Revolutionary War shipwreck on the bank of their backyard creek. Nagiewicz helped them to restore it.

Travis Nagiewicz, Stephen's son and a Communications Studies graduate, was involved in many aspects of the project from brushing off loose rust to driving the boat over the wreck while his dad used sonar equipment to make a map. He also designed the sign that explains the anchor.

"I think what strikes me most is the connection between the entire area and the folklore. There were privateers on both sides, Loyalists and Rebels, and they would be on the Mullica quite frequently," said Nagiewicz.

Also in the audience was Michael Misko, a Hospitality and Tourism major who took a summer class to learn about shipwrecks and got involved with the restoration project.

"In that class we learned that there are at least 3,000-4,000 known shipwrecks sitting out there just off our New Jersey coast. There is a lot of cool stuff you can learn about out there," he said.