Lester Block, Melissa Laurino and John Rokita take a break from working in the vivarium to say hello to the Stockton community with a few terrapins in hand.

Galloway, N.J. - There may be few people on Stockton University’s campus, but the close to 500 terrapins are still multiplying and lizards are eating their protein to stay fit for the time when they can run on the treadmills again in the Unified Science Center 2.

While most of Stockton’s staff are operating out of home offices, those who care for the animals and plants in the vivarium and greenhouse still come to campus to make sure the creatures stay healthy.

Inside the vivarium, rooms are filled with dozens of species, and the daily feedings, weekly cleanings and frequent monitoring continues.

“It’s business as usual,” said John Rokita, assistant supervisor of academic lab services, but “without the labs and classes."

When the pandemic closed area schools, 22 terrapins living in Cape May County classrooms, where students were raising them, moved to Stockton.

A tarantula, millipedes, crickets and cockroaches live in an insect room. Tanks for saltwater and freshwater fish fill an aquarium room, and the herpetology room houses snakes, turtles and lizards.

The creatures that live on campus typically are part of classroom demonstrations for students studying biodiversity, evolution, behavioral psychology and biology. Students meet many of them in Biodiversity and Evolution, one of the early classes in the Biology program. 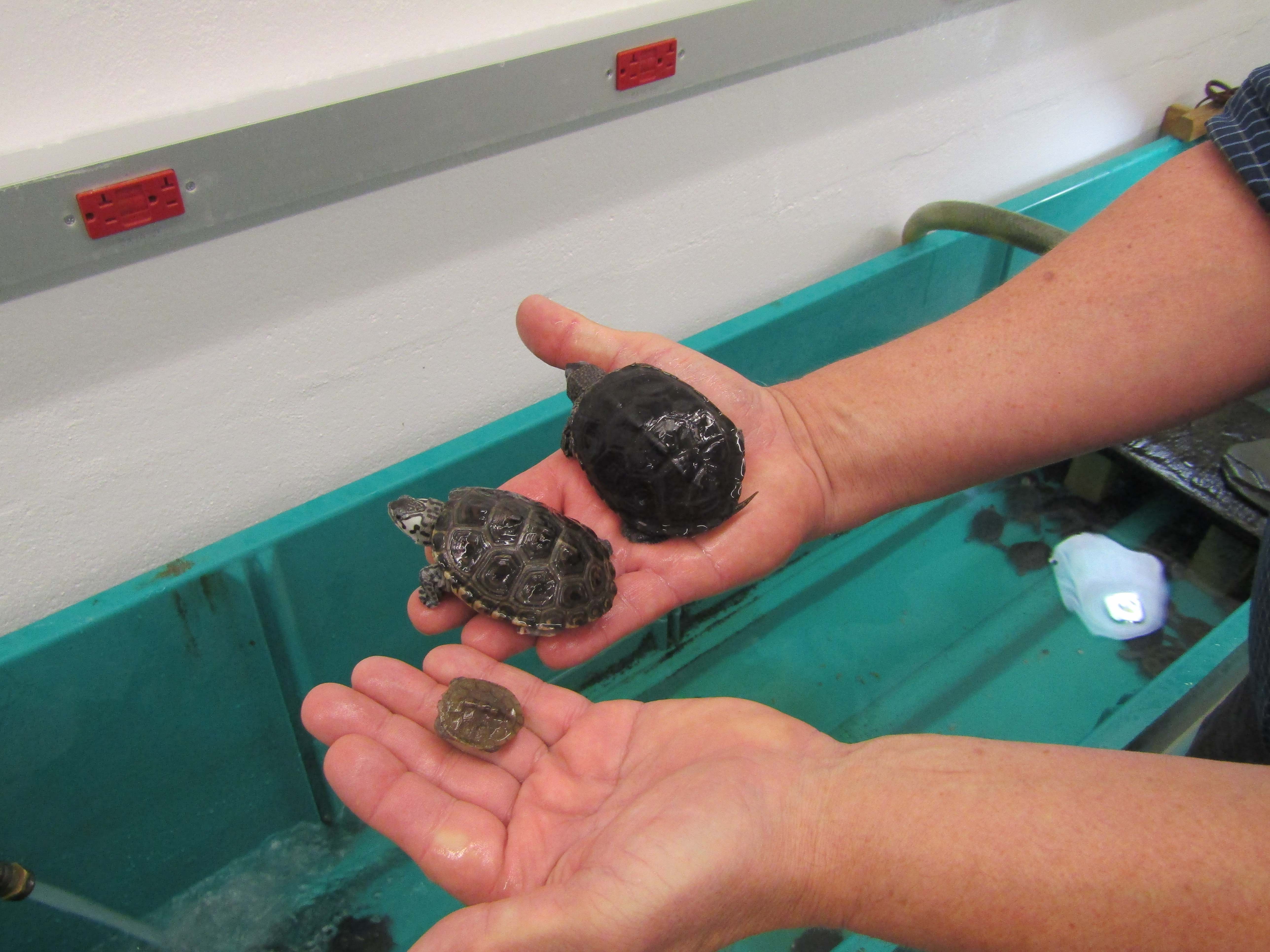 Rokita holds a spring emerger, a terrapin that just hatched, next to year-old head starters to show how quickly they grow under the right conditions.

Two rooms are dedicated to a long-time Diamondback terrapin conservation collaboration with The Wetlands Institute in Stone Harbor. Eggs rescued from road-killed female terrapins are incubated at The Wetlands and raised at Stockton for a year to give them a head start before being released back into the county their mother originated.

The vivarium houses recovering adult terrapins that were injured last year, a dozen that live in captivity, quarter-sized hatchlings from this year and larger head starters that hatched last year and spent the winter on campus. In total, there are close to 500 terrapins in the vivarium.

“As they get bigger, we move them into deeper water so they can build up their swimming muscles,” said Rokita.

Even indoors, nature continues uninterrupted. “Wild terrapins don’t typically start laying eggs until late May and June, but ours, even though they have no access to daylight, seem to know when it’s a new year and spring is coming. They are laying eggs,” said Rokita.

The terrapins living in captivity lay their eggs in the tank water, so Rokita and his team remove them as soon as they find them and place them into an incubator.

“It always amazes me that they wait until early spring,” he said.

On occasion, some of the lizards run on a treadmill to help Professor of Biology Matthew Bonnan study animal locomotion with X-ray video technology. He analyzes movement in modern day reptiles to better understand how dinosaurs moved.

Two mice colonies have their own quarters in a mammal room. When a new litter is born, Associate Professor of Biology Nathaniel Hartman gets an email from Rokita and his staff. Hartman's research studies newborn mice to get an understanding of the molecular mechanisms that guide neural stem cell behavior. 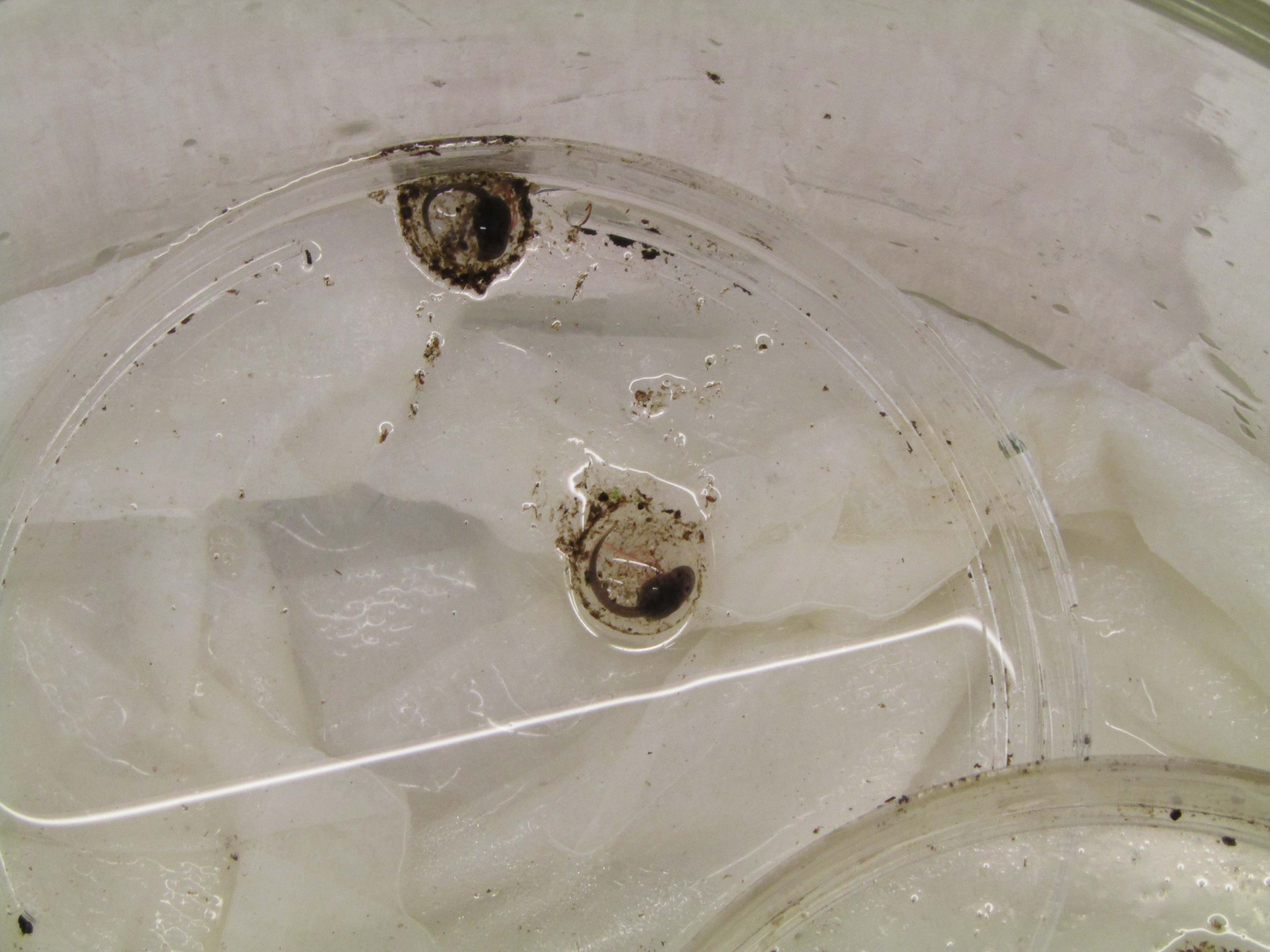 A tadpole shape is visible inside translucent dart frog eggs.

A colorful collection of poison dart frogs live at Stockton, but they are many generations removed from the wild and are not poisonous.

"[Former professors] Alan Steinberg and Rudy Arndt used to take students down to Costa Rica during the winter for Tropical Field Biology. They would find poison dart frogs in the wild, and the students wanted to learn more about them, from husbandry to toxicity," explained Rokita.

O'Donnell had a summer internship at the National Zoo in the Amazonian Exhibit and became a science teacher in Jersey City. Rosshirt, who helped to build the current dart frog display, went on to work at the National Aquarium. 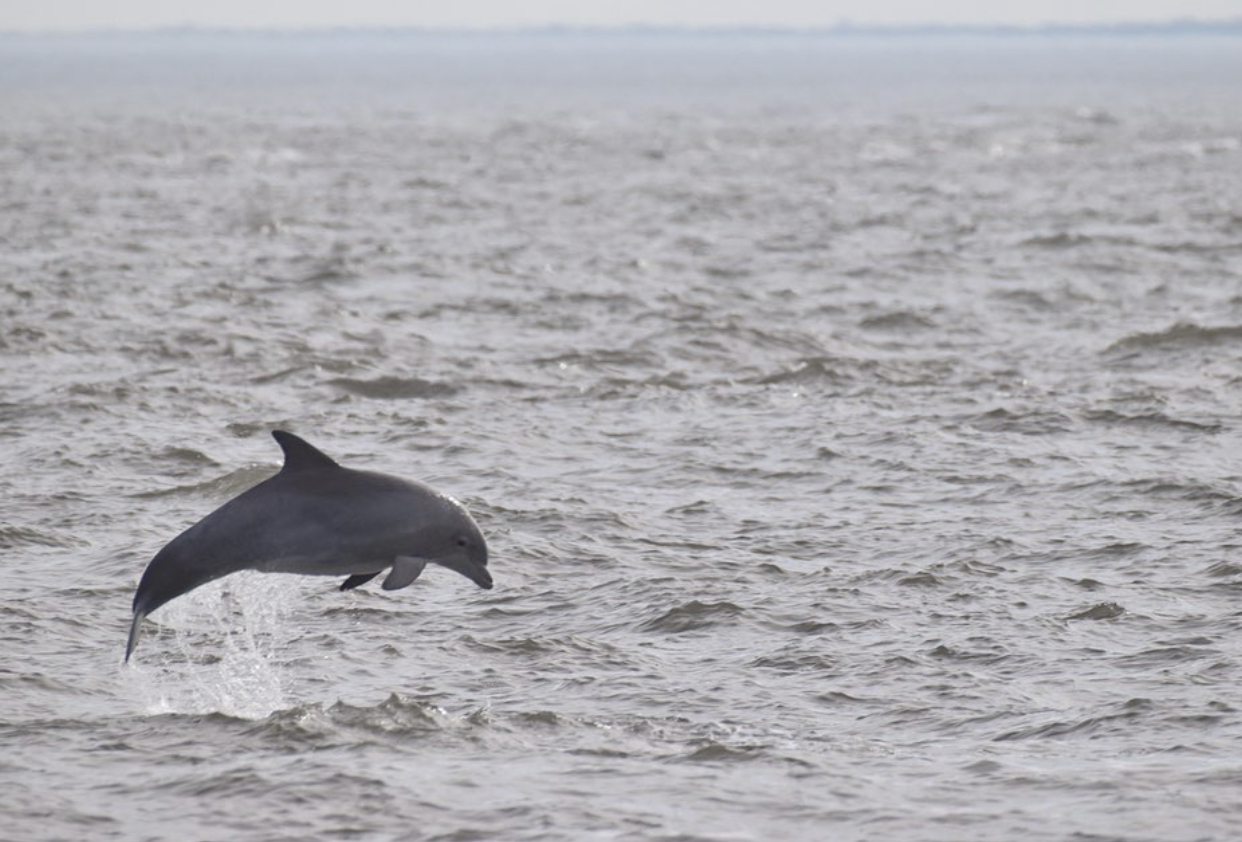 Melissa Laurino photographed this dolphin's return to the coast of Cape May.

Melissa Laurino, animal care specialist at Stockton, who also works at Cape May Whale Watch and Research Center, is usually sharing her marine mammal knowledge with guests on whale watching trips this time of year when dolphins and whales return to our region for the summer and early fall.

The pandemic prevented her from being out on the water at the start of the season, but migration doesn't stop.

“Baleen whales like the humpback whale communicate over many miles, especially in their breeding grounds in the warmer latitudes. If noise pollution from shipping lanes is reduced due to the coronavirus it would be interesting to see how a quieter ocean may impact their annual migration,” she said.

Plants Bloom on Schedule Despite Pandemic

Chrissy Schairer, a professional services specialist who manages the greenhouse, has been going to campus one day a week to clean and make sure that the controlled system for lighting, irrigation and heating is working properly.

“I miss it,” said Schairer, who is used to being in the greenhouse every day. She said the environment keeps her grounded.

So quiet that she’s taken more notice of the birds singing and chirping.

Professors have come to the greenhouse to record videos for their lab sessions to bring virtual plant demonstrations to their students.

On June 19, the public is invited to tour the greenhouse virtually when Schairer, wearing an orchid print mask, will be a guest on Aaron Stoler's Facebook livestream series.

While life has not changed much in the vivarium the absence of humans has changed the campus.

Goslings from Lake Fred march up the Unified Science Center 2 stairs and parade down a traffic-less College Drive following their protective parents. 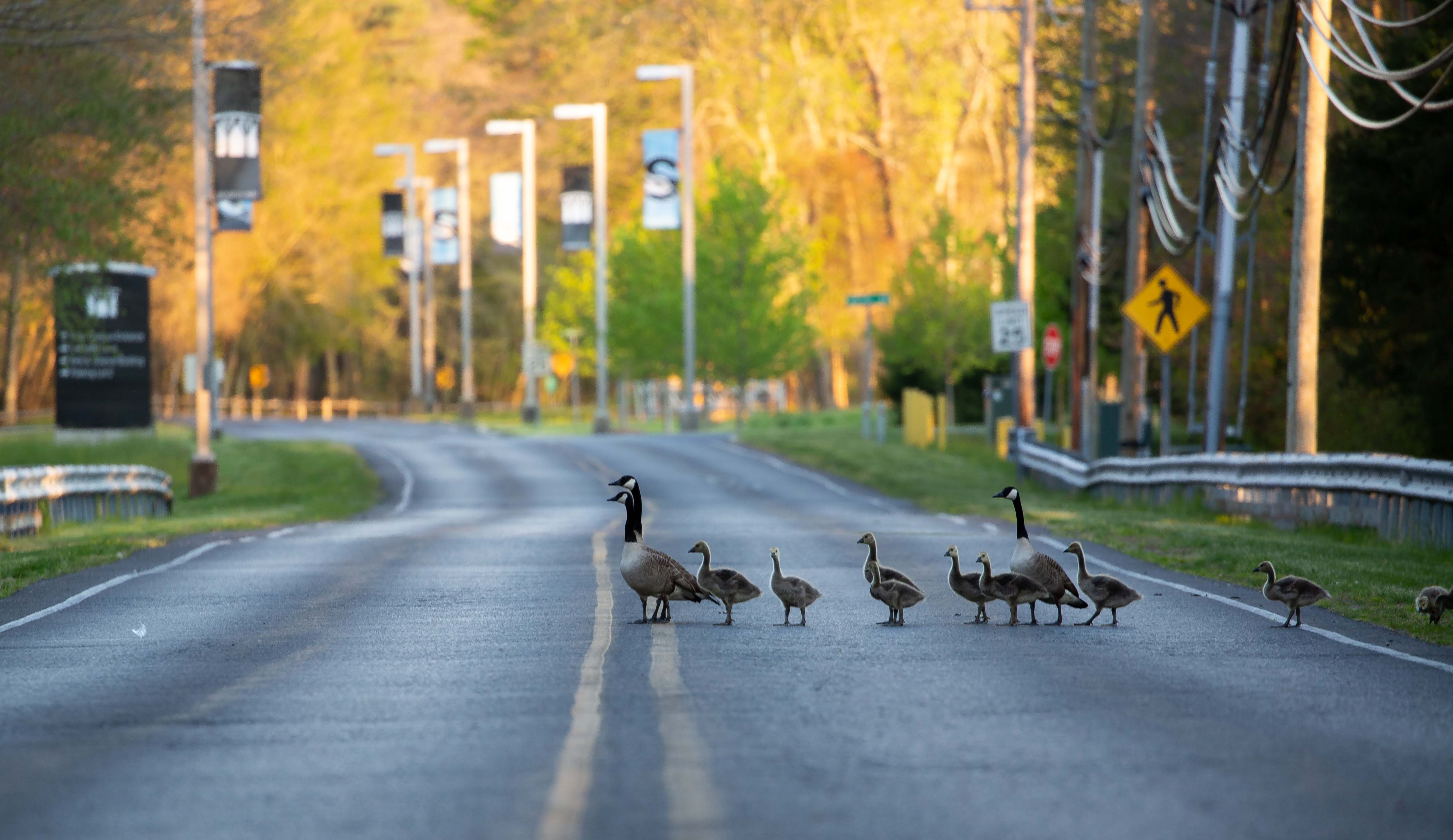 Lester Block, a professional services specialist in the School of Natural Sciences and Mathematics, who assists in the vivarium, said he’s seen more wildlife than students over the past couple months.

By the water molecule sculpture in front of Unified Science Center I, Rokita has seen house finches displaying courtship behaviors, and a northern mockingbird was successful in raising a brood of nestling by the Campus Center entrance.

“I think if we had a steady stream of people, they probably wouldn’t have picked those spots, but it’s so quiet now,” he said.

Lester Block recorded footage inside the vivarium and Chrissy Schairer took photos of the current blooms in the greenhouse to share their daily views with the community.