As recently as 11,700 years ago, the New Jersey Pinelands was often a cold, dry and wind-blown landscape. All that remains are clues in the region's geologic record.

Mark Demitroff, an adjunct instructor for the Environmental Studies and Geology programs, and students in his general studies course Pinelands Physical and Cultural Geography took a trip through the heart of the pines to see the clues hiding in plain sight, like Ice Age sand dunes now concealed by lush vegetation and the marks of cold-climate, non-glacial erosion that helped to shape our modern landscapes and wore stones into wind-faceted pebbles.

Over time, this polar-like scene of long ago—contrasting with the temperate, fire-adapted pine forests of today—was slowly accepted by scientists worldwide. Mark Demitroff has spent the past 20 years searching for evidence and conducting research detailing the Pinelands' permafrost of the past, which many argued never existed here.

During a class field trip on Dec. 6, students climbed to the top of Apple Pie Hill fire tower where they met Craig Watson, of the New Jersey Forest Service, and saw the Pinelands from a vantage point with a forest-top view spanning from Atlantic City to Philadelphia. Afterwards, they visited Warren Grove’s plain of pygmy pine forest.

"The Pine Barrens is a pristine outdoor laboratory where artifacts related to ancient climate change remain remarkably well preserved. Sandy soil early on was deemed 'barren,' unsuitable for farming. The land remained in forest production and was exploited for lumber, naval stores and charcoal," explained Demitroff.

Larger than Yosemite and equal in size to Yellowstone National Park, the Pinelands National Reserve serves as a world-renowned outdoor classroom for students to make scientific discoveries.

Pinelands Physical and Cultural Geography is a derivative of The Pine Barrens, a general studies course originally created by retired geography professor John Sinton. In Stockton's early days, Sinton and his students conducted research that helped to found the Pinelands Commission, an independent state agency that preserves, protects and enhances the natural and cultural resources of the Pinelands National Reserve.

When asked about his courses and its spin-offs on the Pinelands, Sinton wondered, "how many courses have been running for more than 40 years and are still attracting students?"

Jack Connor, professor emeritus of Creative Writing, taught The Pine Barrens after Sinton and developed a blog documenting Stockton's own natural history before passing the course on to Demitroff.

The Pine Barrens course takes students back in time, to one of the highest points in the pines and to heritage sites to teach lessons on history, culture and preservation through outdoor adventures.

View the photo story below by Susan Allen.

Note: The fire tower is closed to the public when it is not staffed. The class received permission from the New Jersey Department of Environmental Protection for their visit led by a Forest Service employee. 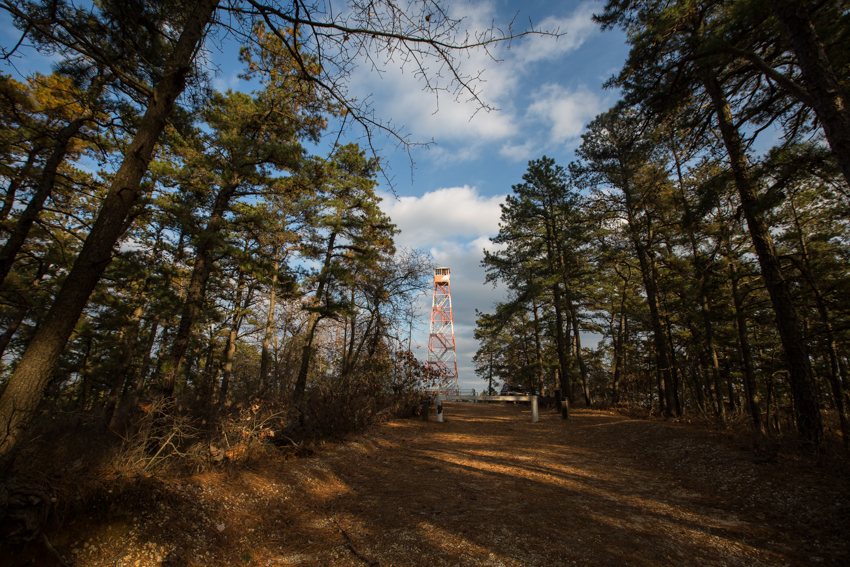 A 60-foot fire tower sits atop Apple Pie Hill, which is 209 feet above mean sea level. This location shows an example of inverted relief—an old gravelly river bottom that is now a hilltop covered in stones. "As rivers changed course, the abandoned channel floors became hardened caps that were more resistant to erosion than the softer old riverbanks. Wearing away of the landscape—denudation—occurred over a very long time with a significant amount of slope modification," Demitroff explained. 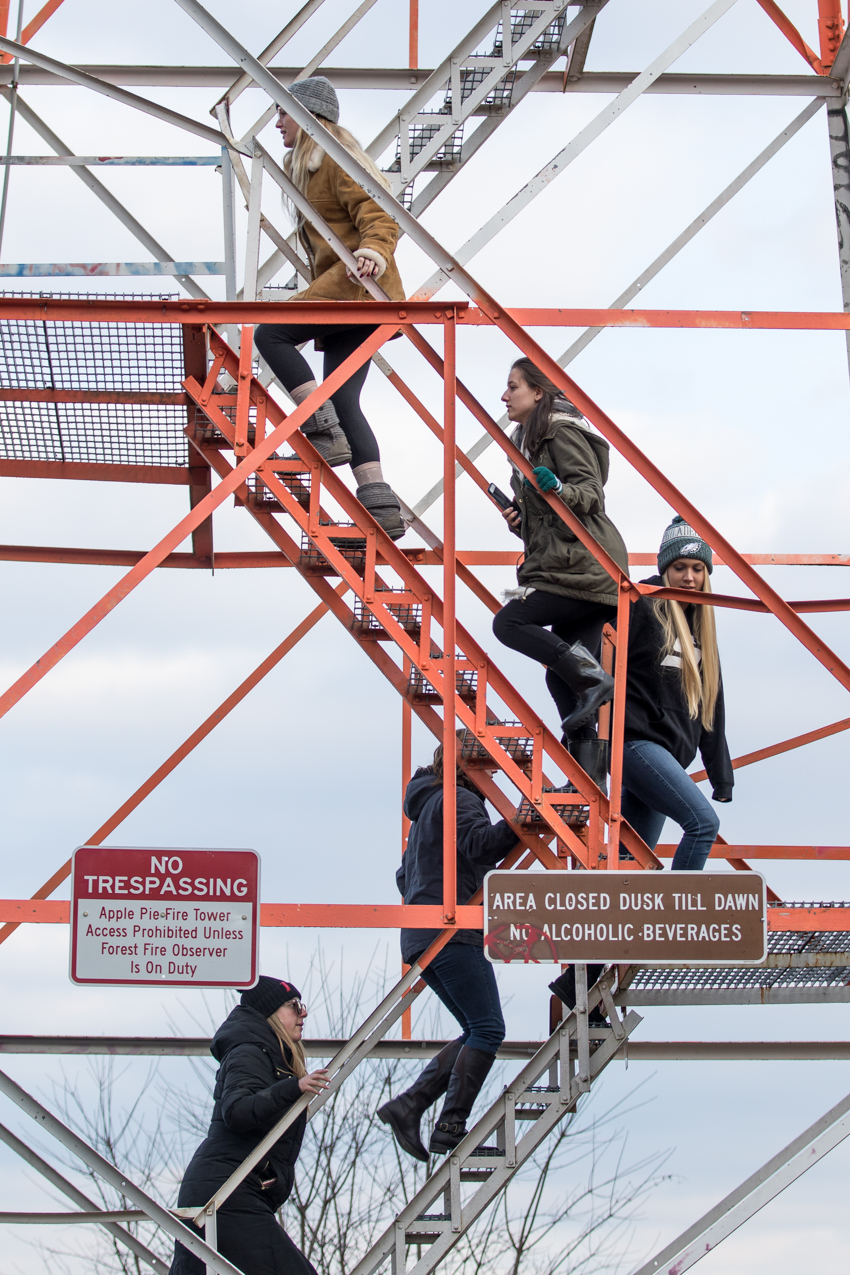 Students climb the fire tower steps for a breathtaking view of the Pinelands. 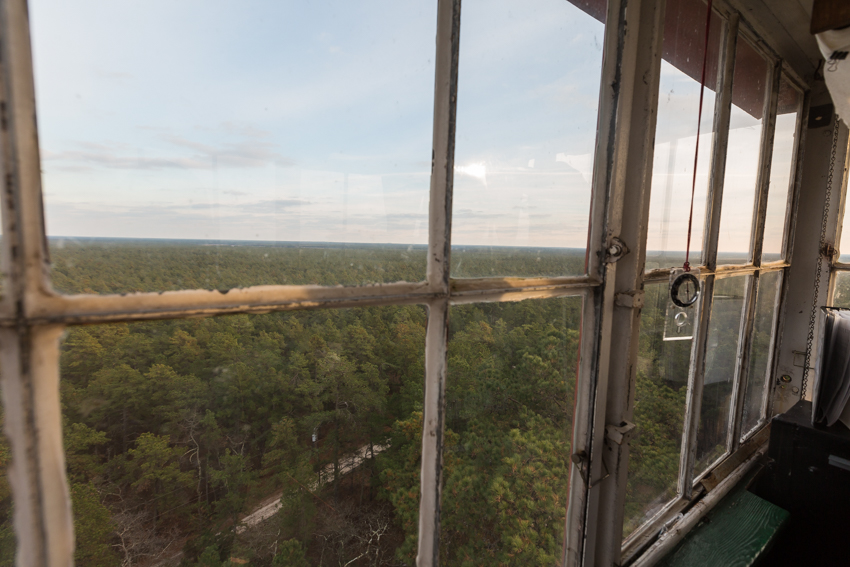 An office with a view high above the pine trees. 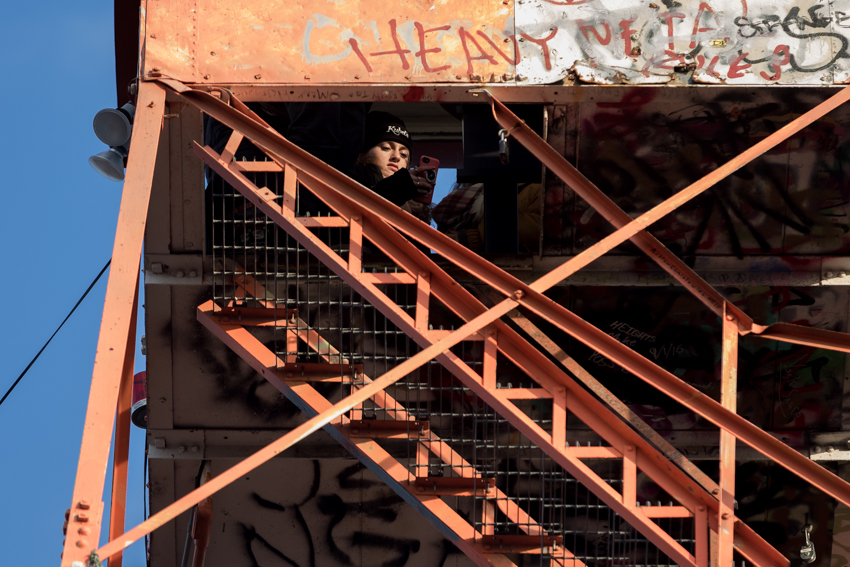 Inside the fire lookout cabin, a student takes a photo. 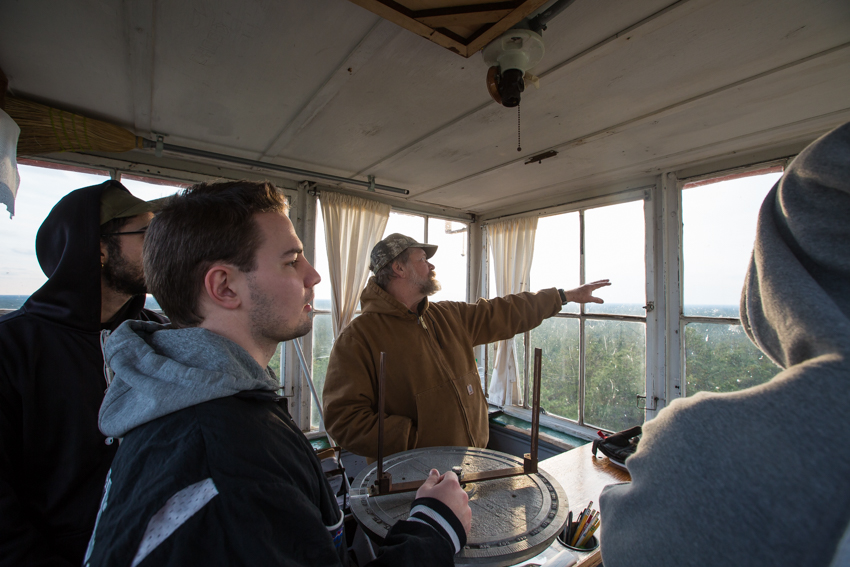 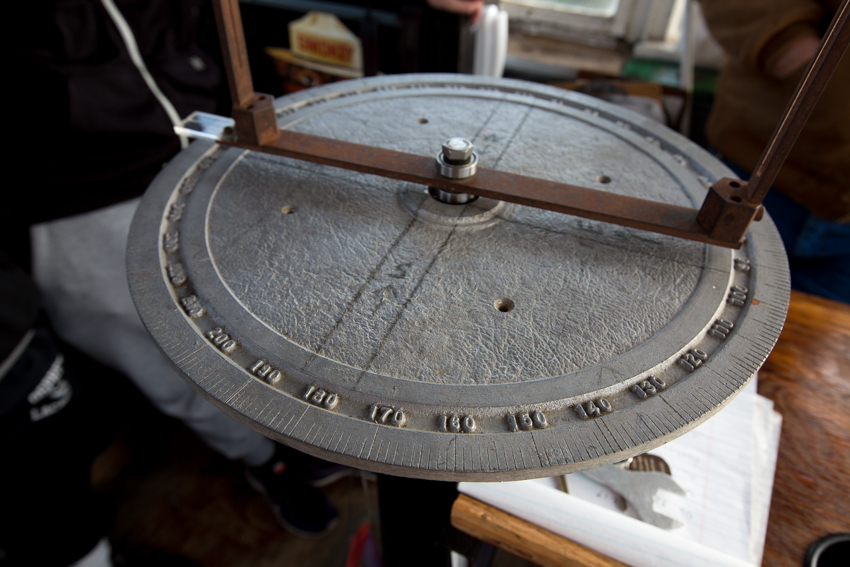 When smoke is spotted, a compass is used to identify an azimuth angle, a measurement detailing the direction of the fire. 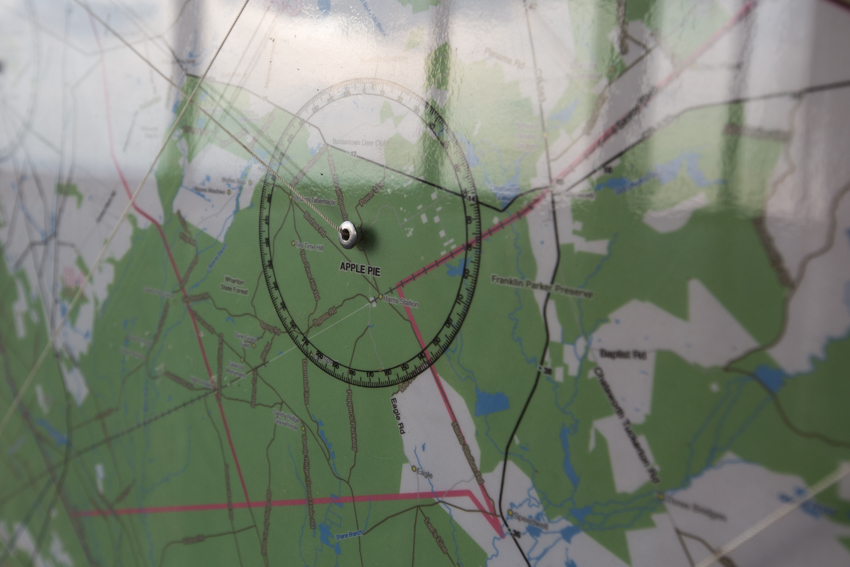 The compass readings from fire towers are displayed on a map with strings. Where they meet marks the fire's location. 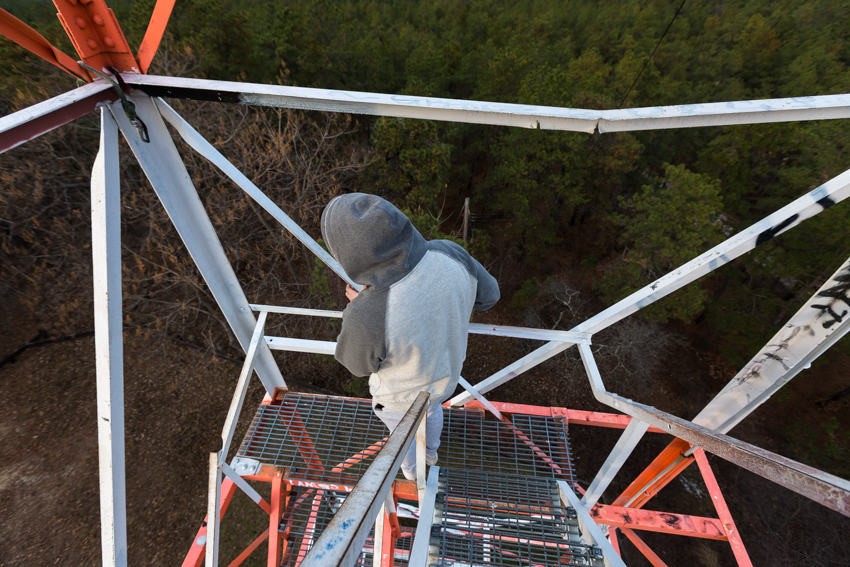 Above the forest canopy, the wind blows unobstructed. 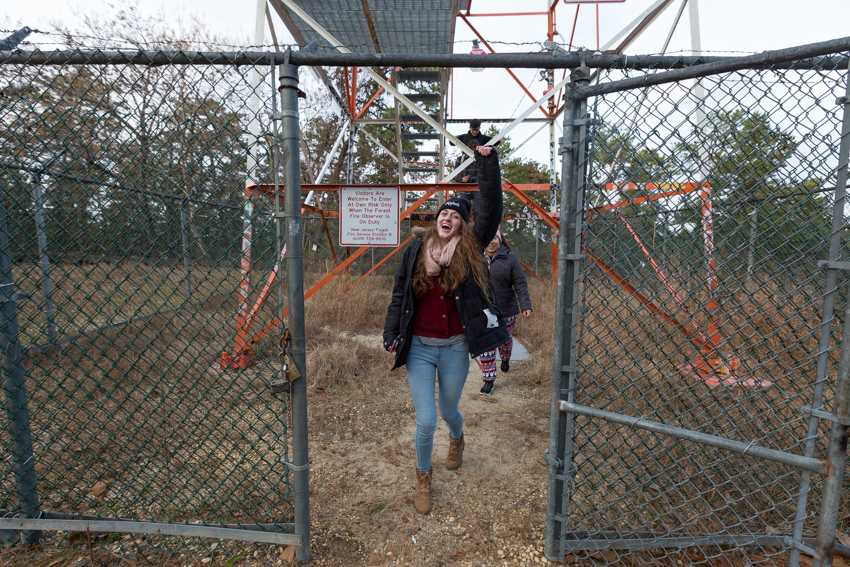 A student celebrates the climb. 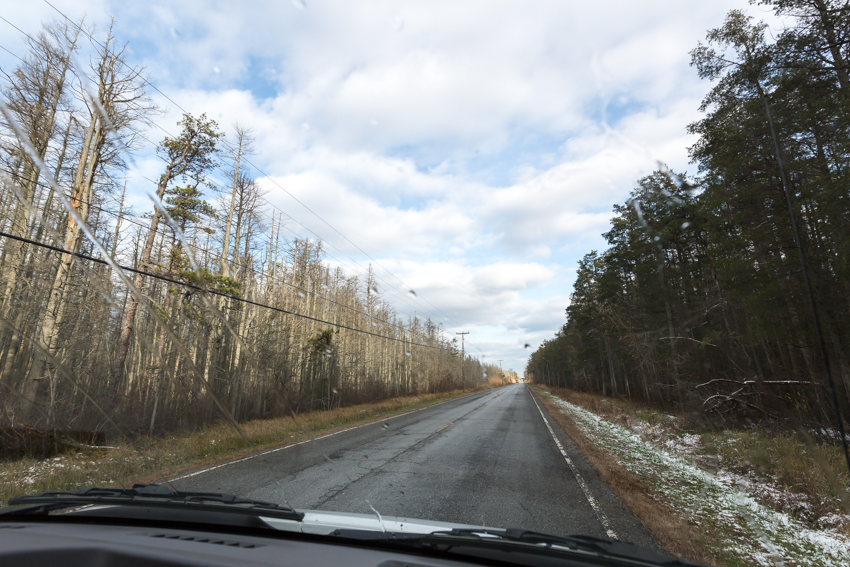 "Has anyone been to the ghost forests? What killed these trees," asks Mark Demitroff as he drives into Lower Bank. An answer comes from the back of the van--sea level rise. Salt water intrusion is causing a die-off in the Atlantic white-cedar stand pictured. Thirsty roots aren't adapted to drinking the rising, saline waters. 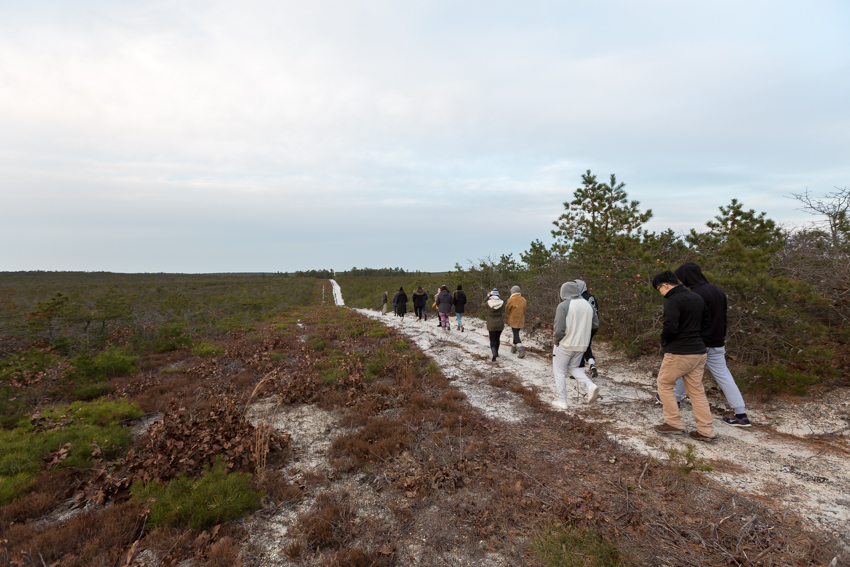 At the next stop in Warren Grove, students walk into the pygmy pines. 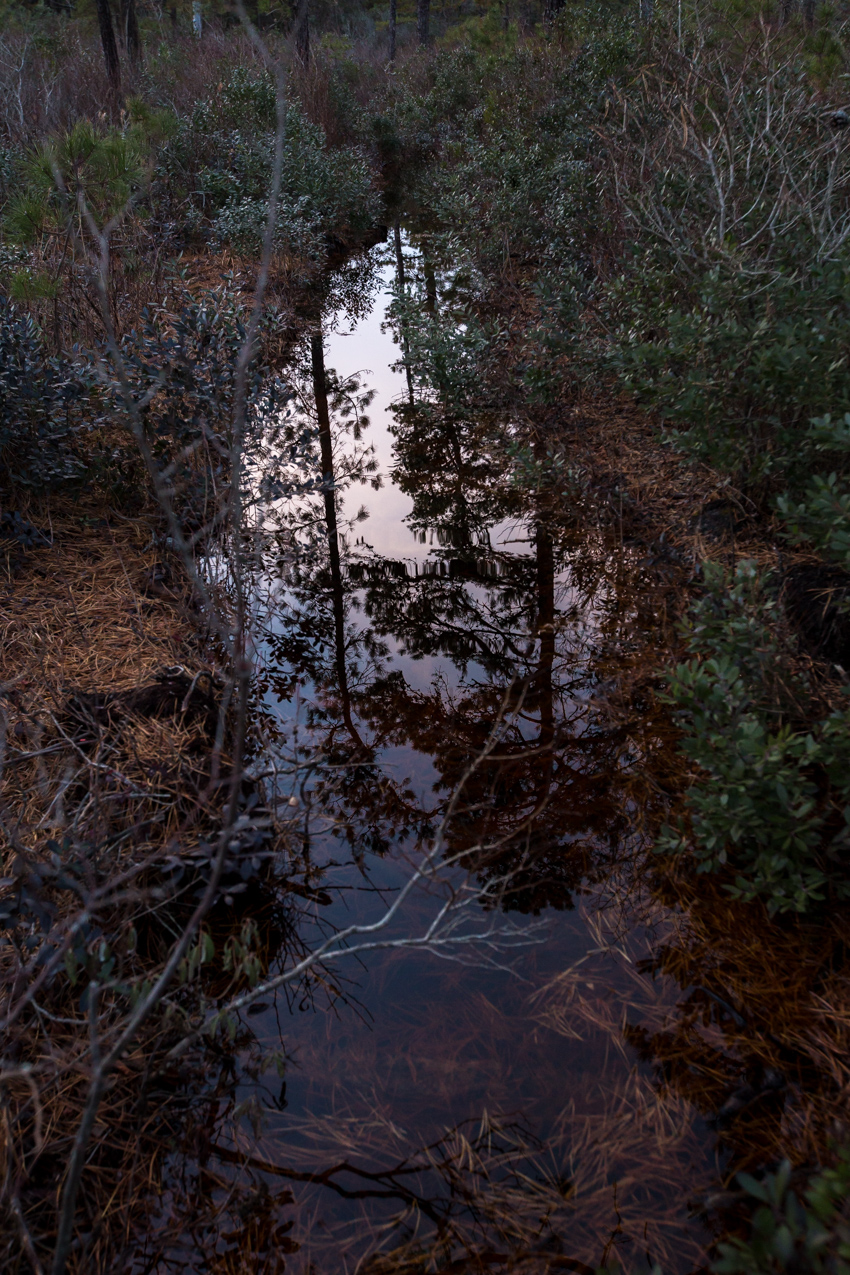 Suddenly the pygmy pines turn into full-sized pine trees. Where the change occurs, the ground is saturated and water from the Kirkwood-Cohansey Aquifer is visible. Mark Demitroff suggests that the trees are genetically the same, but the trees in the wetland area haven't been stunted by fire. He tells his students that this anomaly is a research project waiting to be done. 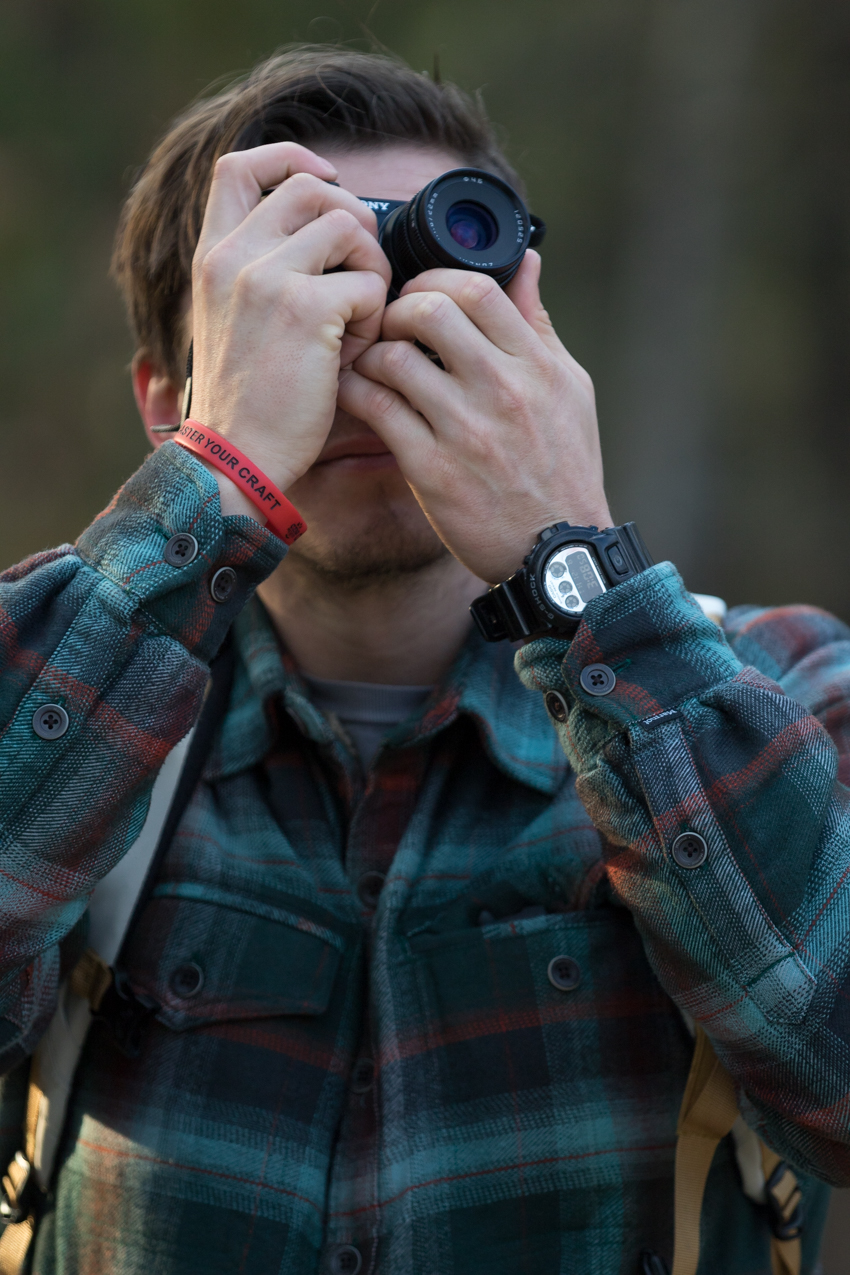 A student captures the trip through his lens. 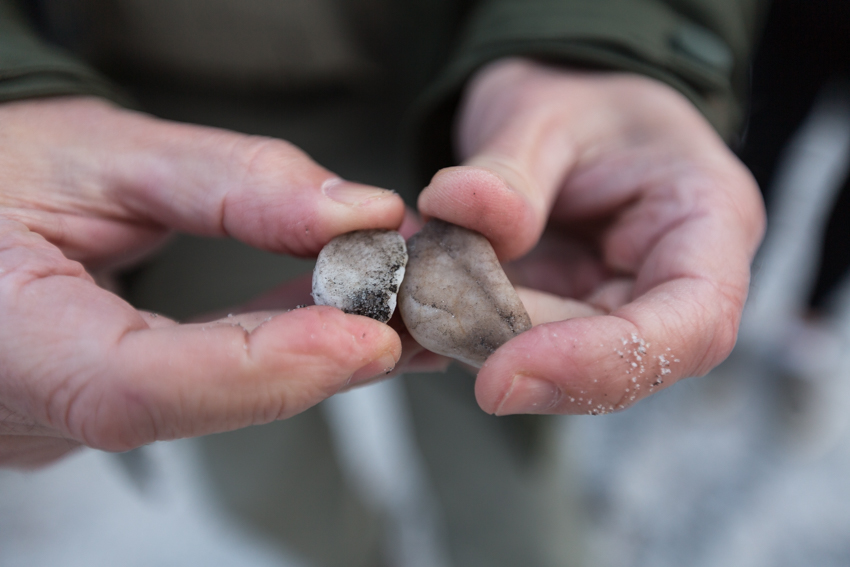 Mark Demitroff shows the upper faces of two sand-blasted pebbles that have been etched until they were planed flush to the ground surface. They fit together like puzzle pieces. 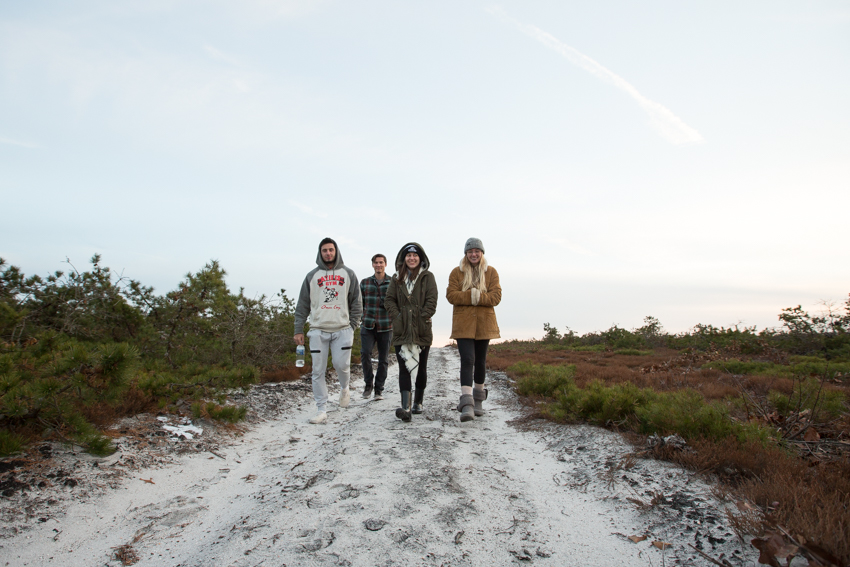 Daylight fades and the tour comes to an end, but the lessons will be carried forward by the students.